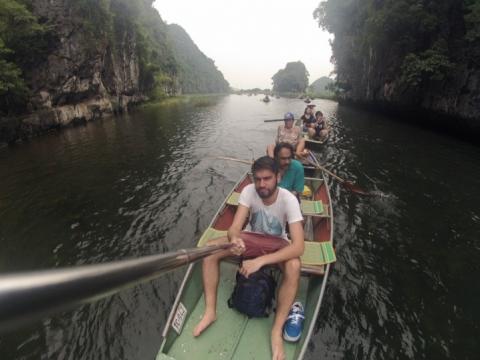 On the 4th of September I went on a quick 10 day trip to Asia! As a result of me having a Kidney Transplant early July 2013, I wasn’t allowed to travel overseas for 12 months, so this was my first time being able to travel overseas since the operation. The main reason we were going was because my Dad had an accounting conference over in Da Nang, Vietnam so we decided it’d be the perfect time to have a quick holiday since the 12 month travelling ban was finally finished.

We started by leaving Sydney at 10pm for Kuala Lumpur, Malaysia (My second home!) where we flew Malaysia Airlines (I know…scary) and arrived at around 5am. My favourite part about doing this leg is that the temperatures are completely different. I left Sydney with it being 12 degrees and raining, and arrived in Malaysia being hit by wave after wave of humidity in the mid 30’s…at 5am! After resting for a bit at the Ludher Villa in KL, we met up with cousins who I’d been waiting to see for quite some time and went for a very filling meal full of fish, rice, satay and roti chanai. After calling it a night, I then had the next day to explore KL with my cousins and again…EAT! One of the street restaurants our family regularly eat at is a place called Uma Rani, and I eat there at least twice every day. After going around the city, we had a big dinner with more Ludher family members back at the Ludher Villa for a big feast. By the time I left KL, I’d gained about 2.5kg within 2 and half days.

Our next destination was Hanoi, Vietnam. When we arrived there, we were again blown away by the crazy heat that hit us. But nothing could prepare us for the insanely crazy traffic that the city experiences. Bikes and cars literally drive straight towards each other to cross the road and then divert in the last possible millisecond as if it’s a circus act. So crazy! During our time in Hanoi, one of our main goals was to see the famous Halong Bay but it got cancelled due to an incoming Typhoon from the Philippines. Instead we explored NinhBinh city, which is about 60 miles away from Hanoi and is known as the “Inland Halong Bay” and although it was a 4 hour traffic dodging drive each way, it was a very beautiful sight to see. We also got to check out other places like the Water Puppet Theatre, as well as try a lot of Authentic Vietnamese Food that I’d never even heard of before. In Sydney, I wasn’t exactly the biggest fan of Vietnamese Food, mainly because I hadn’t tried much of it. Since this trip, I’m now a Pho addict! And no, it’s not pronounced “Fo”, it’s actually pronounced “Fur”. On the last day in Hanoi, it was my Mum’s birthday as well as (surprise!) the hotel owner’s birthday. As a celebration, the hotel threw a birthday dinner with some of the guests in the hotel as well as me and my parents. At the time, Vietnam was celebrating the Full Moon festival so there was tons of Moon cake everywhere for everyone to eat. Not a single person went home hungry that night.

After Hanoi, our next stop was Da Nang, which is kind of Central Vietnam. This is where my Dad’s conference was, and we got to stay in a 5 star resort on Da Nang beach overlooking the South China Sea. For the next 3 days, it was hitting temperatures up to 38-39 degrees Celsius, and we hit back by bathing in the beach and the numerous pools at the resort whilst drinking a few Tiger beers from the Pool bar. Surely I’d knocked off a bucket list item in those 3 days. During those 3 days, we also got to go down to Hoi An, which is just a 20 minute drive south of Da Nang and is known as the city with some Ancient Ruins. Whilst down there, I hired a bicycle and went around some back streets and saw the raw, untouched part of Vietnam which truly gave me a taste of Vietnam’s culture.

Our final stop in Vietnam was Ho Chi Minh City, where we only got to spend one night. In that one night, we got to see some night markets that were running and I bought a nice “Vietnam” tee that I’d been looking for, and it was only 40, 000 dong! Don’t worry, I didn’t get ripped off… 20, 000 dong is the equivalent of $1. Pretty weird.